Why Node.js is Right for Your App

When you’re ready to build an app, you have some serious choices to make. You want to hire a development team that knows the ins and outs of all the different network applications, in order to build the best possible app. This is particularly true if your app is going to need real-time data displays and connections. You will want developers who can work in Node.js. In this article, we will delve into what Node.js is, how it works and why you want Node.js development services. 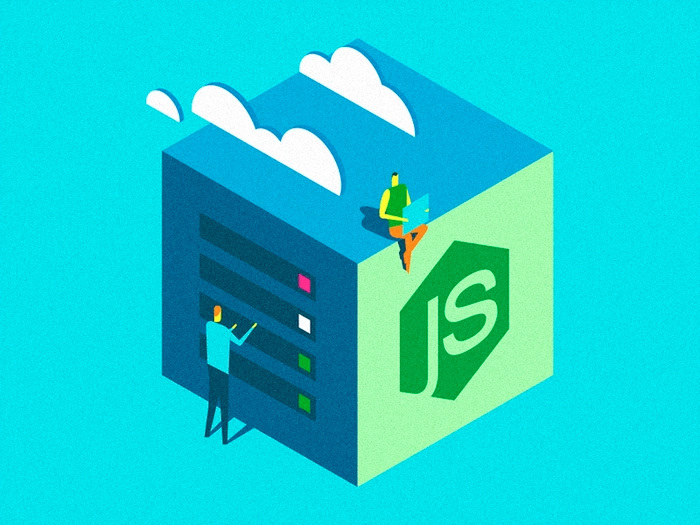 Let’s start with the basics. In layman's terms, what is Node.js?

Node.js web application development is an open-source development platform that executes JavaScript code on the server-side. In a bit more technical terms: Node.js is an asynchronous event-driven JavaScript runtime. It is designed to build scalable network applications. So the next logical question (for those of us non-engineers/developers) to follow might be, what is JavaScript?

JavaScript is a programming language that developers use to make what would have otherwise been a still or stagnant Netscape browser, come to life with logic and interactivity. Since its inception, JavaScript has grown in popularity and has become one of the most popular languages. It is also the standard language for browser-based programming. In addition, it is a leader in server-side language. Its popularity means that it's easy to find developers who can work in JavaScript.

In summary, Node.js executes JavaScript programming language on the server side.What are the Benefits of Using Node.js?

Node.js’ advantages are many and we will highlight just a few here:

Why Is Node.js’ So Popular?

While no major platform, i.e. Facebook or Twitter has used Node, it is known as a developer darling. The traffic and conversations on GitHub (a developer community site) have grown exponentially around Node.js

This is due in part to the fact that apps require more and more power to achieve the desired results for users. Users want instant access to information and updates in real-time. With traditional frameworks, this would be very hard to accomplish and cost much more. Node steps in and fits the bill with its speed, scalability and ease to build.

Node is not just a viable solution for web based applications, it’s also being used in voice command and communication software and in gaming. With audio applications that require live audio, Node is a great option because it allows a very large number of connections to be maintained with low latency. It is particularly useful in building real-time games where players square off against each other.

How Fast is Node.js and Why?

Node. js is viewed as being very fast in terms of execution speed. Execution speed is the time it takes to process a request and deliver a response to the client. It begins with the first connection and terminates when the client has the answer on his/her screen. It is much faster than its older counterpart Java upon which it is built.

Node.js is single-threaded and asynchronous thereby I/O activity does not conflict with or slow down other processes. With Node it’s possible to multitask from sending emails to searching databases at the same time.

With Node.js, one process is constantly running, awaiting connections. Conversely, all JavaScript code runs off of the main thread of the process, and other I/O activities happen in a different thread so that there is no latency.According to Enterprise Apps Today Node JS can cut loading time by 50%-60%.

Where Is Node.js Commonly Found?

Node.js is highly used and considered quite valuable in the following areas:

Microservices allow software product components to be built separately, this can help eliminate problems if there’s a flaw in one component it won’t necessarily affect the others. Developers using Node.js to build microservices have an uninterrupted flow, because Node.js code is fast, highly scalable, and easy to maintain.

Serverless computing is an architecture style; the code is executed entirely in a cloud platform. This means that the cloud functions handle what would have been done by the hardware and software setup, security, performance, and CPU idle time. It eliminates the software and means that there’s no configuration to run code. Node is a great platform choice for serverless cloud functions.

Command line applications (CLI) are frequently used tools for automating tasks, such as deploying production applications, running tests, building reports, migrating data, etc. These steps can be automated with scripts. Writing scripts in Node.js is an easy way to automate.

Node.js is also a fantastic platform for building desktop applications, which are downloaded and installed on computers themselves. Node is a desired platform for this because of its speed to create and ease of maintenance. Applications that use Node.js include:

Netflix is the world’s leading streaming service that boasts 150 million subscribers in over 190 countries. With heavy streaming demands, Netflix relies on Node.js for quick responses and streams. Netflix has a reputation for investing in its interface, spending $150 million per year on improving its recommendation system alone.

Twitter, the popular social networking platform recently acquired by Elon Musk, has over 330 million monthly active users and is one of the top ten most visited websites in the world. Twitter switched to Node.js in 2017 and the speed and immediacy of deployment have fit the company’s needs.

Uber, with its highly popular app, is a ride-connecting service that connects passengers with drivers to take them where they want to go. With a presence in more than 700 cities and 65 countries, Uber serves more than 110 million users and has over 3 million drivers. Uber used Node.js to build its core and make its app responsive and with rapid real-time capabilities. Node.js works well for high volume usage and quick scalability.

Coursera is an online business that partners with universities and organizations to offer online courses, certificates, and degrees. It has over 33 million users worldwide. Since its start, Coursera has been built entirely on Node.js. The company was looking for a JavaScript framework for quick development time and ease to scale. They chose Node for its significant number of modules that can be used to add various features to an app.

If you know you want to build your app with Node.js for its attributes we’ve discussed above, and are shortlisting vendors who can build your ideal app using Node.js, you may want to consider working with a company outside of the US. Outsourcing your development project to a nearby country (a practice known as nearshoring) has many advantages and few to no disadvantages, when you work with the right agency. The following is a short list of just a few of the many points to consider.

Selecting an agency that is in a nation geographically nearby means that you will be working on similar to identical time schedules. No midnight meetings or delays due to vast time differences when nearshoring. And, if the need arises, the development team is a short flight away and can quickly be in your office or vice-versa.

When partnering with a nearshore business, there is a high level of cultural similarities in terms of work ethic, deadlines and expectations. The US and Latin America have a long history of working together and share similar cultures.

Nearshoring for US companies means working with agencies in Latin America. Latin America (and Costa Rica in particular) boast high levels of education through quality technical schools and esteemed universities. This results in a highly qualified workforce. Nowhere is this more true than in the software development industry. Software engineers and developers are frequently matriculated from top universities.

This translates into a highly skilled technical workforce with excellent knowledge of programming and development platforms.

Latin American agencies not only hire the best and brightest talent, but also professionals who speak and write fluent English. This makes communications seamless; no translation necessary.

Nearshore partners offer dedicated IT teams of developers and engineers; or if you prefer, the nearshore component can join seamlessly with your existing team. Either option provides access to smart, talented developers and engineers whose services are based on your specific needs. With full, ready-to-go teams operations and development can be expedited and productivity increased. Products can be launched sooner, and competitors left far behind.

Working with a nearshore agency will certainly cost less than working with the same level and qualified developers, engineers and project managers based in the US. Cost may be on the chopping block, but quality, however, is not. You’ll get the job done, quickly, correctly, and will likely have your expectations exceeded, all within your budget.

As discussed above, there are many benefits that make nearshore software outsourcing a desirable solution. If you’re ready to nearshore but don’t know how to find the right partner, read our blog article, 8 Steps to Choosing a Nearshore Partner That Fits Your Company Culture or check out an interview with Pixel506’s CEO, Antonio Ramirez as he discusses nearshoring.

At Pixel506, we know the benefits firsthand and have seen our clients succeed in strong nearshoring relationships with increased profits, accolades, and fewer risks.

Node.js is being hailed by some as the new Ruby on Rails. Ruby on Rails revolutionized programming and was known for great flexibility, security and a short development period.

Node comes in handy in developing applications that need a constant connection from the browser to the server. This is ideal for applications that need to be frequently updated, examples include: chat services, news feeds, and push notifications. In an ever-increasingly connected world, Node.js is a highly regarded choice.

As an open-source programming language, node.js stays on the cutting edge of technology. Developers are constantly sharing and building the best possible solutions for Node.js.

Node.js is also designed to build scalable network applications. Its ability to handle many connections simultaneously is what makes it stand out from the competition. And in cases where there are no work orders, Node.js can sleep.

Since 2009, we have continuously expanded our knowledge, skills, and experience. Today, as an end-to-end marketing agency, Pixel506 offers a wide variety of services across the creative, digital and technological landscape. Our people-focused, data-driven, and results-oriented philosophy ensures that everything we produce is wholesome, measurable, and efficient.

We invest heavily in developing and maintaining strong client relationships. By working closely with our clients, we ensure that we offer customized solutions and deliver high-quality, insightful, and actionable results. Most of our team members are located in Latin America, but we are a Brooklyn-born company with a strong client base in North America.

Are you considering software development nearshoring? Looking for a reliable partner agency? Interested in learning more about our services? Leave us a message and we’ll be sure to get back to you as soon as possible.

Our free report can help you boosting your sales.

Our free report can help you boosting your sales.

Send me my free eBook